Alex Mayer, of Harleysville PA, takes three consecutive wins in the F1000 class at the Mid-Ohio Sports Car Course. Alex entered the SCCA Great Lakes Divisional as a practice and test for the upcoming 2016 SCCA Runoffs Presented By Garmin VIRB to be at this same track in late September. The intention was to use this Divisional competition to tune the car. However, shortly after arriving, Alex's JDR/MayerMotorsports Team was greeted by several national competitors from throughout the country, all with the same intention. What began as a low pressure test week quickly transformed into fierce competition. 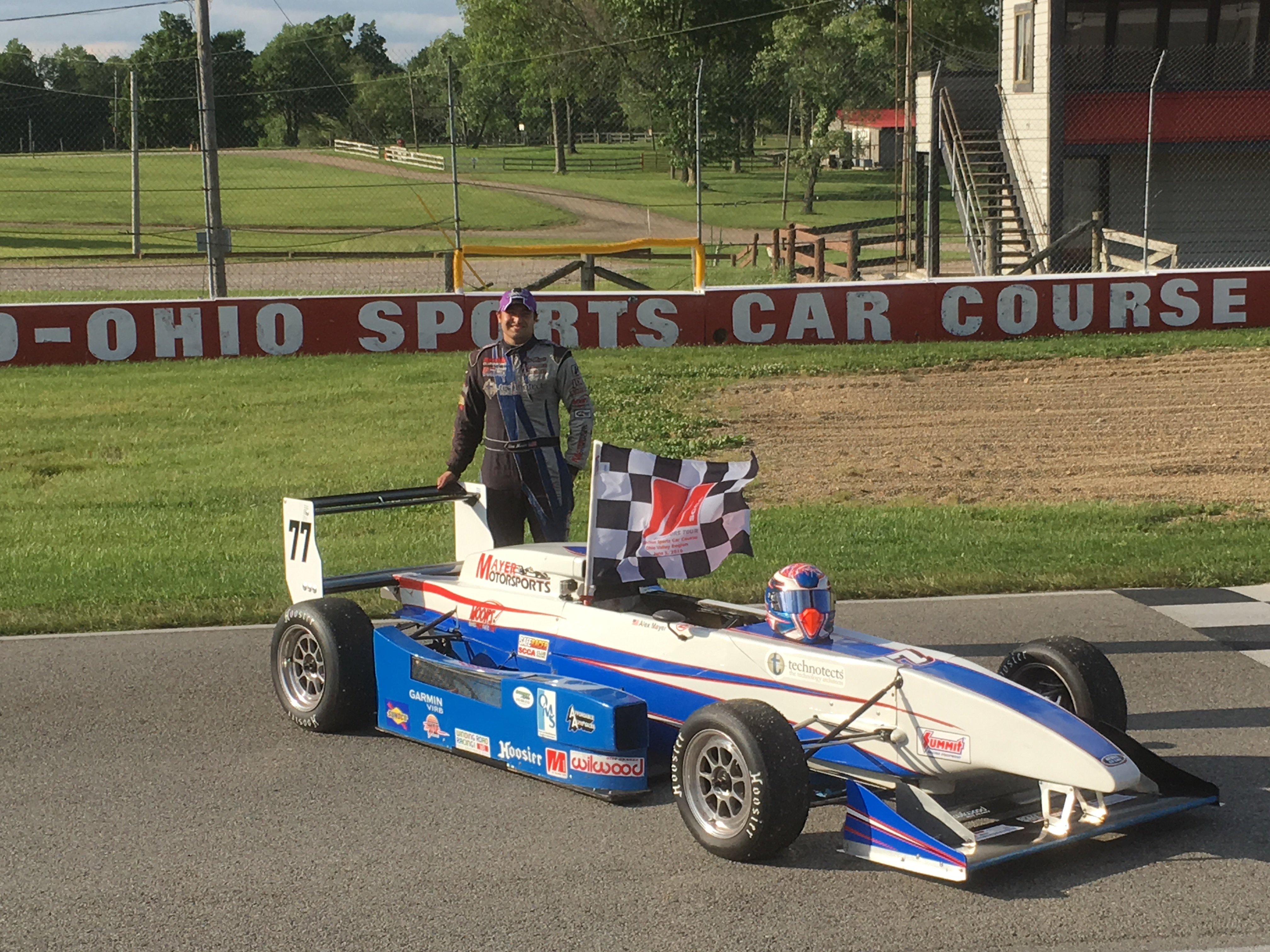 The Mid-Ohio 2.258 mile road course offered an ideal track surface. The IndyCar Series was there the week before and laid down fresh rubber that improved traction. The quick lap times of Thursday and Friday practice encouraged all the competitors to tune for a new lap record. The triple race weekend provided the perfect opportunity to set a record.

Alex qualified on the pole position for race number one on Saturday. The race was extremely close. Although Alex took the win for race #1, the second place driver Nicho Vardis from Michigan, turned one slightly faster lap by 0.062 seconds. Kevin Roggenbuck from Washington finished third, and Jeremy Hill of Toronto fourth. All four drivers were within 0.096 seconds of each other while overtaking lapped traffic in the 22 car field.

Race number two on Sunday morning placed Nicho on the F1000 pole position with Alex, Kevin, and Jeremy following. At the wave of the green flag there was a three-wide drag race going into and through the first turn. Alex prevails and takes the lead from Nicho. All drivers lap times are a bit faster than the previous day as the morning temperatures are slightly cooler. Alex and his F1000 JDR Racecar turns the fastest lap of the race and sets a Mid-Ohio New Lap Record. The previous record holder was Nicho Vardis also in a JDR Racecar and set only one month prior.

Race number three on Sunday afternoon has Alex once again on the F1000 pole position. Alex pulls a comfortable gap between himself and his competition at the drop of the green flag. He maintained his lead as his competitors are busy fighting to overtake each other, as well as protecting their valuable positions. Alex takes the win with only a few seconds margin of victory.

These latest back to back triple wins awarded Alex three first place finishes and two pole positions in the SCCA Great Lakes Division, as well as taking the points lead to also be awarded the 2016 Great Lakes Divisional Points Championship for the F1000 class. The F1000 New lap Record places Alex as the driver to beat at the Mid-Ohio Sports Car Course as we go into the September winner-take-all traditional Runoffs Championship.

Alex and his JDR/MayerMotorsports team also have two previous victories at the June 3-5 2016 Mid-Ohio SCCA US Majors Tour earlier this year. These five consecutive wins offers Alex's team an advantage as the entire F1000 class returns to this track in late September.

For more information on the September Championship to be held at Mid-Ohio Sports Car Course: