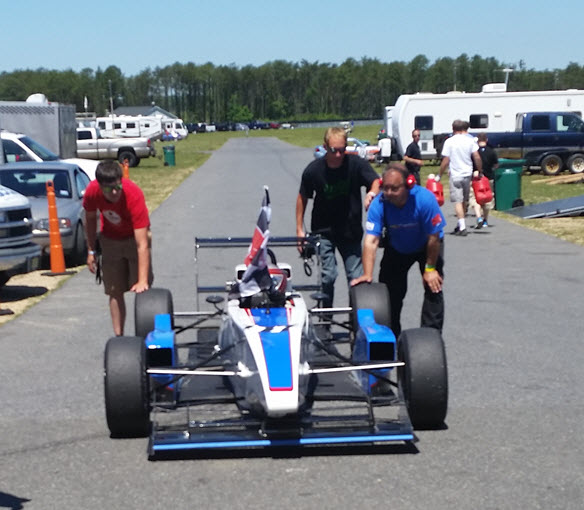 It was a hot weekend in New Jersey on the 2.25 mile circuit. The heat was over 100 degrees for the Saturday race. Alex qualified on the front row and maintained the F1000 class lead from the drop of the green to the checkered flag. The goal of the weekend was to lower the track record that Alex already owns. High track temperatures and discovering that the previous race group had a car blow an engine and oiling the racing line on the fastest corner erased any attempt to set new records. Alex set a blistering race pace while making sure he did not push his tires harder than necessary, as the extreme track temperature could overheat his tires. The Hoosier race tires took the punishment on Saturday, and wheeled Alex and his JDR racecar to Victory Lane.

The Sunday race was under hazy skies and only 95 degree heat. Although the temperature was down slightly from the previous day, the Sunday feature race would be 7 laps longer. Alex once again manages his Hoosier tires for a repeat win to dominate the SCCA U.S. Majors Tour Points Championship. Alex has accumulated ten wins, one 2nd place, and one 4th place during the 2016 season.

Alex Mayer leads the SCCA F1000 class points championship with a comfortable points margin going into the September 19-25, 2016 SCCA National Championship Runoffs Presented by Garmin VIRB. The Runoffs is a winner-take-all championship of the best drivers throughout the country. This year's Runoffs competition will be held at the 2.258 mile Mid-Ohio Sports Car Course where Alex has several previous victories and JDR Racecars documented their first ever 1-2-3 JDR podium finish.

Alex wishes to recognize Hoosier Tires, Wilwood Brakes, and Jerry Hodges of JDR Racecars for their excellent customer service, technical assistance, and parts development. Greg Moon of Moon's Supercycle has supplied all Alex's engines, and holds the record for the most engine hours, number of miles, number of races, and most wins on a single engine between rebuilds. Alex is supported by Technotects, OMS, and Affordable Auto Sales.

You can also find MayerMotorsports on fb